We may sometimes add a notice to an account or Tweet to give you more context on the actions our systems or teams may take. In some instances, this is because the behavior violates the Twitter Rules. Other times, it may be in response to a valid and properly scoped request from an authorized entity in a given country. Below is a range of the notices you may come across when viewing an account or Tweet.

Placing a Tweet in violation behind an interstitial: We may allow controversial content or behavior which may otherwise violate our rules to remain on our service because we believe there is a legitimate public interest in its availability. When this happens, we limit engagement with the Tweet and add a notice to clarify that the Tweet violates our rules, but we believe it should be left up to serve this purpose. You can read more on how we review Tweets that may be in the legitimate public interest.

Notice for a removed Tweet that violated the rules: If a Tweet was found to be in violation of our rules, and has yet to be deleted by the person who Tweeted it, we will hide it behind a notice. The account will remain locked until the Tweet is removed.

Labeling a Tweet that may contain disputed or misleading information: If we determine a Tweet contains misleading or disputed information that could lead to harm, we may add a label to the content to provide context. For Tweets containing media determined to have been significantly and deceptively altered or fabricated, we may add a "Manipulated media" label.

Tapping these labels may link to a Twitter Moment or other trusted source to provide additional information. Learn more about our policy on synthetic and manipulated media and our approach to handling misleading information.

Hiding a violating Tweet while awaiting its removal: Once Twitter takes an enforcement action and the person removes their Tweet, another notice will be available for 14 days after to acknowledge its removal.

Where this notice is available:

Where this notice is not available:

Withholding a Tweet or account in a country: We may withhold access to certain content in a particular country if we receive a valid and properly scoped request from an authorized entity in that country. We also clearly indicate within the product when content has been withheld. Read more about country withheld content.

Hiding a reported Tweet: If you’ve reported a Tweet, we will hide it behind a notice and give you the choice on whether or not you want to view the content again.

Hiding a Tweet from a muted or blocked account: If you have muted or blocked an account(s) and their Tweets are shared by someone else, we’ll hide the content behind an interstitial and give you the option to click through and view it. Additionally, if you’ve muted keywords, we’ll place Tweets that include those behind a notice. Read more about muting and blocking accounts.

In some cases, we may add notices to accounts because of their account settings, while we wait for the account owner to update their account so it’s in compliance with our rules, or if we detect unusual activity from it. Also, we take action at the account level if we determine that a person has violated the rules in a particularly egregious way, or has repeatedly violated them even after receiving notifications from us.

Verifying account ownership: To ensure that violators do not abuse the anonymity we offer and harass others on the platform, we may require the account owner to verify ownership with a phone number or email address. This also helps us identify violators who are operating multiple accounts for abusive purposes and take action on such accounts. Note that when an account has been locked pending completion of a challenge (such as being required to provide a phone number), it is removed from follower counts, Retweets, and likes until a phone number is provided. 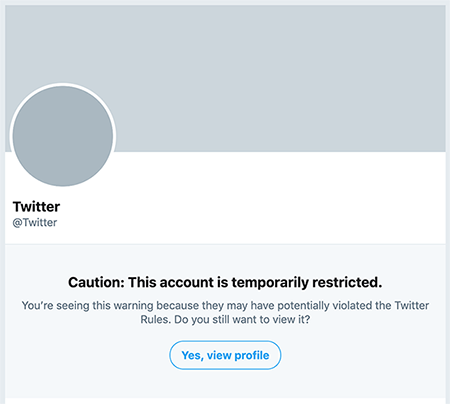 Permanent suspension: This is our most severe enforcement action. Permanently suspending an account will remove it from view, and the violator will not be allowed to create new accounts. When we permanently suspend an account, we notify people that they have been suspended for abuse violations, and explain which policy or policies they have violated and which content was in violation.

Violators can appeal permanent suspensions if they believe we made an error. They can do this through the platform interface or by filing a report. Upon appeal, if we find that a suspension is valid, we respond to the appeal with information on the policy that the account has violated.